Dervish was born in the village of Ceravran, located about 20 minutes outside of Malisheve in central Kosovo. He has 2 brothers and 3 sisters. The family moved to Malisheve in 2006.

Dervish grew up in a Muslim family. He would fast every year for the month of Ramadan and would go to the mosque every Friday during his teenage years. He learned some prayers in Arabic and would pray them a few times a day.

His family lived a minute away from the current church in Kosovo. He hated the church and the people there. He said he could not interact with them because he was full of hatred and bitterness towards “you Catholics.” That’s who he thought they were.

Urim Zogaj, now the pastor of the church, started a soccer ministry as an outreach to young people. Urim was the assistant pastor at the time and Dervish joined the team to play soccer.

“I would go just to play soccer and have fun,” Dervish said. “My friend Enis wanted to play as well so I invited him.”
Over time, Dervish got more interested in listening to Bible studies and even attending prayer meetings. He started attending church meetings and reading the Bible.

A few years ago Dervish came to Pastor Urim and said, “This is what I thought about the church and Jesus before, and how much I hated all of you, the Bible, and Jesus. But I believe I have found God and I am ready to say I believe in Jesus.” So pastor Urim led him in prayer and Dervish soon got baptized.

Pray for Dervish, his friend Enis, pastor Urim and the young men who attend the church. Their Muslim friends and families often pressure them to give up their faith in Christ. 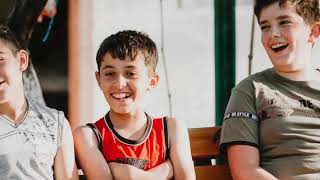 Sasha A. needs monthly sponsorship as a Ukrainian missionary at $50 per month Sasha is a Ukra…
Continue Reading
Dervish Berisha

Peter Wooding and the Ministry of Assist News

Would you like to sponsor a ministry for The Persecuted Church? Mercy Projects facilitates the As…
Continue Reading
Gennadiy Korovay