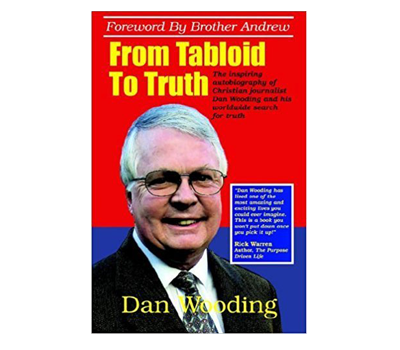 From Tabloid to Truth

The inspiring autobiography of Christian journalist Dan Wooding and his worldwide search for truth. Wooding worked for British tabloids but his life was transformed, and he became a champion for the persecuted church. He has traveled around the world and interviewed celebrities and political and religious leaders as he covered the momentous events of our times. Foreword by Brother Andrew, and a special introduction by British rock star Rick Wakeman. Rick Warren, author of "The Purpose Driven Life," says, "Dan Wooding has lived one of the most amazing lives you could ever imagine. This is a book you won't put down." Pat Boone, Mike MacIntosh, actor Dean Jones and Pulitzer Prize winner Dallas Kinney all have high praise for this exciting and inspirational book.

Following the announcement that ASSIST News Service founder Dan Wooding passed away aged 79 on Wednesday, March 18, after a long battle with cancer, his son Peter Wooding reflects on his father’s remarkable life and the ongoing impact of his media ministry. Read the article.

Save this product for later
Display prices in: USD